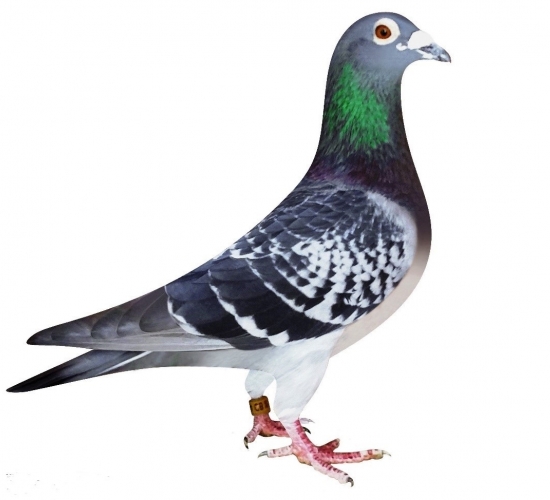 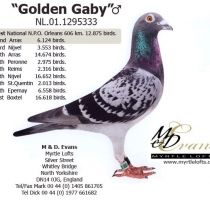 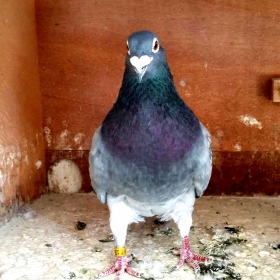 In October and December 2006 I bought 14 pigeons (6 and then 8) from Mark and Dick Evans (Myrtle Lofts) and they arrived in two shipments in South Africa in 2007. When I finally got the last 8 pigeons after the 30 days quarantine period they all looked well, except for one young cock GB 06/13364 - a son of GOLDEN GABY and LADY MORISKA. As fate would have it, this was the pigeon that I thought would be one of the best purely judged on pedigree and the fact that his father GOLDEN GABY won 1st National 606km against 12875 pigeons by 20mpm. His uncle ORLEANS WINNAAR (his mother's brother) was also a big winner and won 1st Orleans 435km against 11435 pigeons.

Despite being bred from super pigeons I decided that I don't want a sick pigeon in my breeding loft. I was on my way to the dust bin to send him to heaven when a voice said "you have paid a lot of money for him - take him to the vet!" To make a long story short, after a visit to Dr. Gavin Rous (and the lab results from Onderstepoort a week later) we could determine exactly what was wrong and what medication I had to administer. After 3 days on medication GB 06/13364 (I later called him GOLDEN EYE) started to look much better and after another two days the problem was solved. Little did I know at the time what an impact he would have in my loft and in the lofts of others. He bred some exceptional pigeons and the best were with MOOIE BLIKSEM (inbred granddaughter of BLIKSEM and daughter BAKLEIGAT BLIKSEM), LICHTE KLEINEN and HALF PINT (granddaughter WITTENBUIK). His children not only raced well but many of them also turned out to be excellent breeders.

He is one of my foundation cocks and his descendants are responsible for super results in big competition in South Africa.