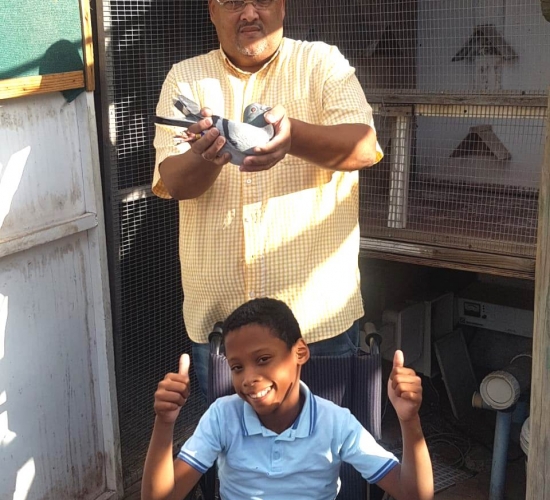 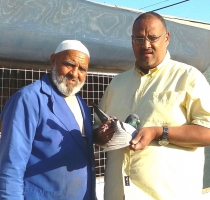 Warren Charles and his son Joel started racing in the strong SWPC in the Western Cape consisting of 130 plus members. Warren purchased for his first season 12 babies from Bertus and had immediate success as a novice.
In only their third race, they won 3rd, 5th and 6th in a Laingsburg Combine (3 birds on the drop) with a birdage of 1960 birds, winning their club and the North section respectively as well as 15th, 17th and 18th WCPTA against 6352 birds. All three the pigeons were bred by Bertus. Two of them daughters of SONNY BILL x BLOUE MARIEKE and the other one a daughter of 40199 (BANGE BLIKSEM x LADY COOLS) x 74416 (granddaughter GOLDEN EYE and WITTENBUIK 306). Warren subsequently purchased some stock birds from Bertus to build a family of birds he can rely on against strong competition. He ended club champion in his first season with 11 first places and mostly from the 12 babies he purchased initially from Bertus.
Warren and Joel had an excellent 2019 season and were crowned Club champions and Wynberg Homing District Union First Bird and All Bird champions as well. Another highlight was 1st in a Hot Spot race at CENTRAL PROVINCIAL LOFTS with a little cock bred out 0314 (the daughter of SONNY BILL x BLOUE MARIEKE who won 03rd position in the Lainsburg Combine in their first season mentioned earlier). 0314 mated to 44082 (son WITTENBUIK 306 x HALF PINT) has bred them numerous winners as well as breeding their best yearling 10338, a little blue bar hen, herself a North Federation winner and 5 time scorer at Federation level.
Her best results in the Federation:
2019 Season results summary:
Bertus Nel
PIGEONS